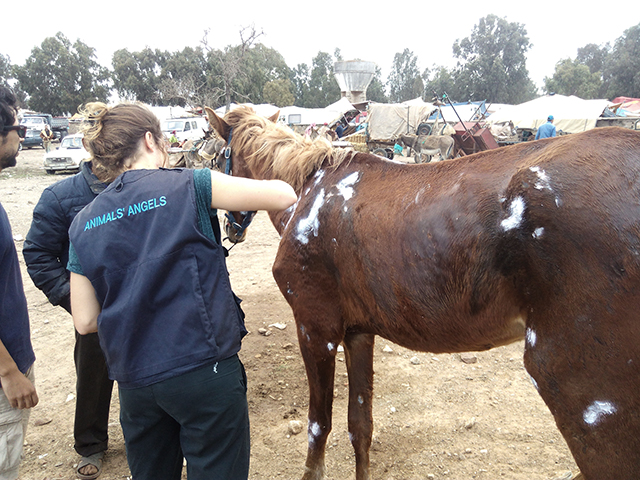 The Animals’ Angels team in Morroco inspects two of markets in the country: Mers El Kheir and Skherat. Most of the sheep and birds, like turkeys and ducks, are unable to move freely as they are lying on the ground and/or are tied up. Many sheep are also tied to each other by their necks, making it hard for them to breath freely. The cows tend to receive a bad and very rough treatment in general. In the slaughterhouses we see a lot of problems concerning the hygiene and the slaughtering of the animals.

Nevertheless, in this sea of problems, the Animals’ Angels team in Morocco – Ali, Habib and Boubaker – has been doing and still does an incredible job by improving the way in which the animals at the market are handled. For example, they were able to increase the number of donkeys that are given a rest by taking of their harness and also gained the trust of the farmers visiting the market.

Today, an Animals’ Angels team from Germany supports them in their activities teaching them more about the treatment and prevention of injuries and wounds. We free most of the donkeys from the pain of waiting with the harness and get confronted with many different cases as some owners ask for help for their injured or ill animal.

One particular case is Ahmed, a horse who has several wounds all over his body. Even so his owner could not train him to pull carriages, he forced Ahmed to pull one. As he always refused to pull, Ahmed ended up being repeatedly hit and fell over several times. The owner is grateful that we clean and disinfect the injuries and promises us to sell Ahmed.

Although we are there to treat the injures of Ahmed and other donkeys, mules and horses, it is necessary that Morocco discuses and implements an animal protection law that punish those that do not take proper care of their animals.

By handling their animals adequately, as they are being taught by our team in Morocco, the owners will reduce difficulties in their daily life. Animals’ Angels will continue to raise awareness at the market and continue to pressure the authorities to implement an animal protection law.