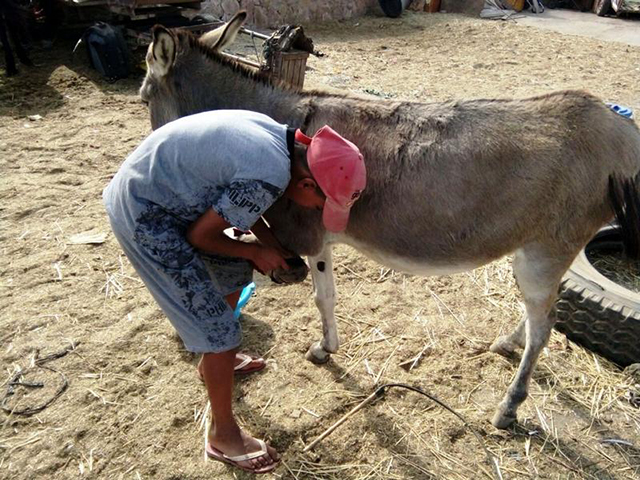 Again today, about noon, our team arrives at Temara souk. They organize some water before going over to the donkeys. On their way there, they meet a man selling coal out of a cart which has been pulled by his horse Asil for four years now. Apart from the dirt and dust sticking to him from transporting coal, Asil makes an overall good impression. The Animals’ Angels team starts to clean him using the the donated combs and cleaning utensils and he visibly enjoys their caring. Ali, Habib and Boubaker talk to his owner who appears to be reasonable and they give him a new halter which he accepts gratefully.

Further on their way to the donkeys they meet the three brothers Hamza, Abdelalhak and Laarbi who live near the souk. They help our team watering the donkeys, and being questioned whether they wanted to know more about them they answer with an enthused ‘yes’ – this way, a little workshop for the boys comes into being.

Ali explains to them how to properly scrape out a donkey’s hooves. Hamza is scared at first and does not want to get near the donkey. After some time, he finds the courage but when the donkey is not willing to hold out his hoof anymore and gets nervous, Hamza starts yelling at him. Ali explains to him that he must not treat animals like this because this kind of behavior is stressing and frightening them even more, but has to approach them with love and respect to calm them down.

This may seem obvious to us, but for the animals it is daily routine to be roughly treated at these markets – and the children adopt the adults’ behavior. This is why it’s so great to see these boys being so motivated and interested to better know and understand the animals. After Ali’s lesson for Hamza is completed, Hamza says: “Now I understand why my donkey does not want to walk anymore! His hooves are filled with dirt and stones. From today on I will keep them clean instead of hitting him to make him move!”

The other two boys are also being shown how to treat the donkeys with dignity and receive practical instructions on how to clean them. For the successful completion of the workshop, the boys each happily receive a new halter for their donkeys. After the workshop has already ended, Ali, Habib and Boubaker see how they once more unharness one of the donkeys at the market. Being asked what they are up to, they answer: “We are going to get feed for the donkeys.”