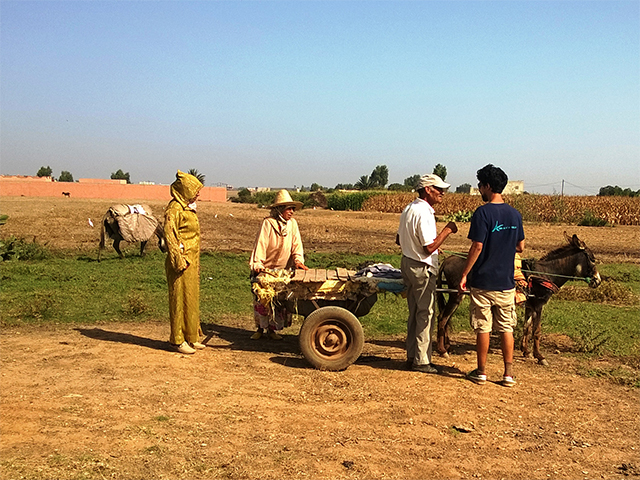 Yesterday, one of the biggest Spanish radio stations, Cadena SER, published an online article dedicated to the donkeys and the work of Animals‘ Angels in Morocco.

In the Interview, our Moroccan employee Ali gives insight into our on-site work at the markets and the biggest prevailing problems for the animals. He tells that in Morocco one can already buy a young donkey for about 40 to 50 Euro – so consequently, they are not particularly being treated with respect and appreciation. Ali regularly experiences this during his visits at the markets where he again and again meets emaciated donkeys that have to endure being tethered in the blazing sun, without water and feed, or have to carry much too heavy loads. This is why it is not only of utmost importance to provide for the animals, but also to educate the owners and give them an understanding of how to better treat and handle their animals.

The article also mentions the multi-day workshop which Animals’ Angels organized in spring in cooperation with the Spanish organization Refugio del Burito (The Donkey Sanctuary) to provide exactly this kind of education. For example, the owners were trained by an export team to learn the correct use of harnesses and bridles. The next workshop is already being planned, although Ali knows from his own experience how difficult it is to raise the owners’ awareness for the needs of their animals.

We are pleased that the articles also addresses the human-animal relationship because although donkeys have been working loyally alongside us humans for centuries – whether as ‘pack’ animals or on fields or in cities – they do not receive the respect and the appreciation they deserve. Therefore, we hope that with the on-site work of Ali, Habib and Boubaker we can go some way towards a change of thinking and mutual respect.

By the way, the article was inspired by two headlines concerning two donkeys recently punished in Morocco: one was sentenced by court for the alleged transport of drugs while the other one was taken off the streets by a tow truck for allegedly breaking traffic rules.