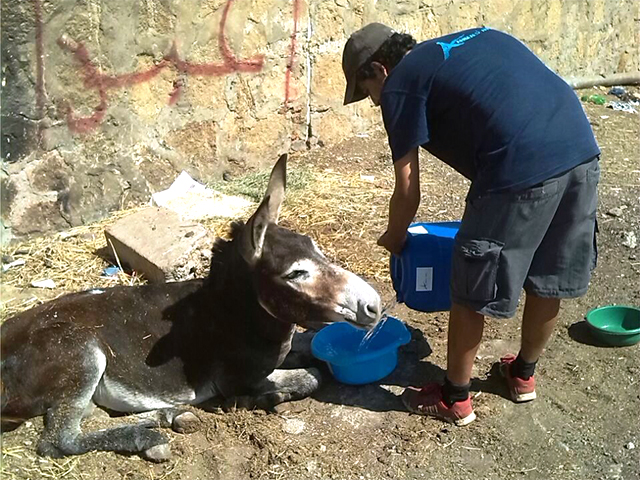 Arriving early in the morning, our Moroccan team is back at Mers El Kheir animal market. There are already many people being mainly interested in buying and selling sheep because the Muslim Feast of Sacrifice – Aid El-Adha (Feast of the Lamb), for which it is common to slaughter an animal – is about to start in two days.

Ali, Habib and Boubaker are there with the lambs and sheep who are treated very roughly. Especially during loading and transport the handling of the animals is very poor: they are dragged onto the means of transport which are often just small carts with a ‘loading platform’. On such they are transported – one above the other, with their legs tied together.

Our team is also there with the donkeys who are standing tethered in the sun, waiting for their owners. By now, as they are regularly given water by Ali, Habib and Boubaker, the animals recognize and welcome them with a hee-haw. Thanks to a woman living in a small old shack near the market, our team is able to refill their water cans so that all the donkeys and ‘working’ animals at the market receive enough water.