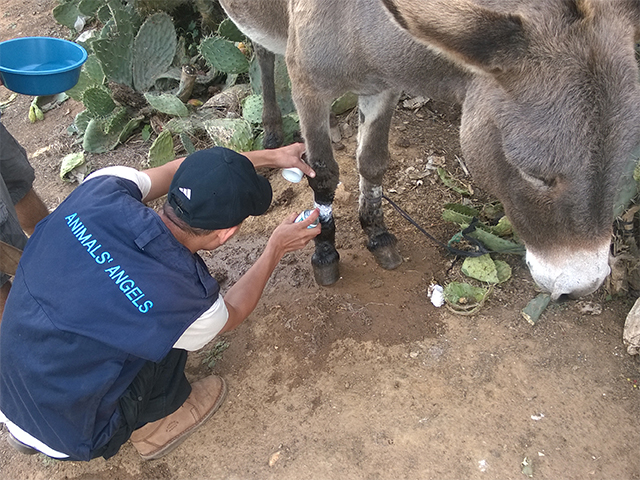 Animals‘ Angels is again taking action for the ‚working‘ animals at Skherat animal market. To begin with, our team tries to find horse Ahmed whose wounds they have been treating for two weeks now. But today he is not at the market. His owner doesn’t answer our team’s call, but nonetheless they will try to find Ahmed.

By now, due to the arduous work of Ali, Habib and Boubaker, first improvements for the ‘working’ animals slowly become apparent: no longer do all of them have to wait for their owners while being all hitched-up to their carts and some of them have better equipment now. Donkey Alya was even unhitched and given hay by her owner on arrival at the market. When Ali, Habib and Boubaker ask him why he named her Alya he says: “In our language Alya means the greatest, the best, the most valuable – and she means everything to me.”

But unfortunately, not all encounters are that positive, like with our old acquaintance Michel the donkey. When we met him for the first time he had some very bad wounds at his back caused by his load saddle. Since then, our team has been treating him on every occasion. But today he has a fresh wound at his leg, caused by the tethering-ropes used to prevent him from running away – unfortunately the most common method used at these kind of markets. Our team thoroughly cleans and disinfects his wound and educates his owner and his son who also has a donkey, Chichawa, who also has deep wounds due to wrong tethering and equipment.

At the end of the day, after our team has examined and, where necessary, treated all the ‘working’ animals, they take away the owners’ sticks and riding crops because they are used wrong way too often.