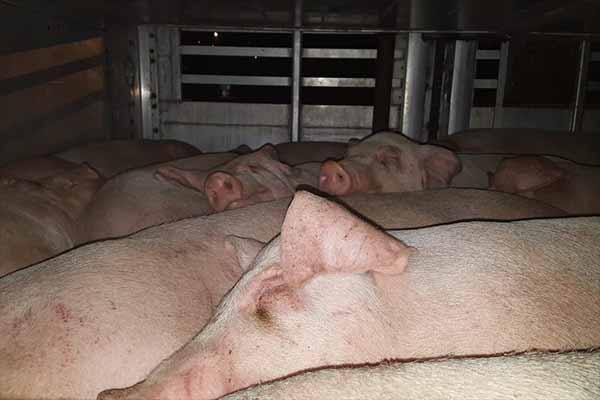 Anda and Animals' Angels follow an animal transport with pigs from the Spanish border to Italy. 190 pigs are laden on three decks, crowded and exhausted by the long transport and the heat. They are taken to a slaughterhouse in southern Italy.

We discover that the animals on the second and third levels do not reach the watering troughs - either the water nipples are positioned too high or too low. According to the law, pigs must have continuous access to water during long distance transports. Once again, we find that reality is different – at temperatures above 30°C. It is unimaginable and simply irresponsible that this transport was approved over a distance of more than 1,800 km.

In France, the drivers adjust the height of the second deck so that the animals can at least reach the watering troughs. But the pigs on the third deck still can't get there. In Italy we arrange a police check. The young policemen are highly motivated, even though they are probably checking an animal transport for the first time. The official veterinarian called in is unfortunately no great help. He wants to let the truck drive until we explain the problem with the water troughs. In addition, the water tank is empty. We also point out again and again the too high temperatures in France and the too low ceilings for the animals on the first level. The driver tries to adjust the loading decks so that the animals on the third deck can finally reach the watering places. Unfortunately in vain.

The police impose a fine on the transporter, the official veterinarian does nothing. We discuss that an emergency unloading of the animals would be necessary - so that Emiliano and the other 189 pigs can drink properly and recover from the strains of transport. Especially as the maximum permitted transport time of 24 hours is very likely to be exceeded. But in the end, the official veterinarian does not prescribe anything. The police must ask the drivers to fill the water tank at the nearest petrol station. Unfortunately, they cannot check it, even if they would like to. That's why we follow to make sure that at least this happens.

We complain to the competent authorities in Spain and Italy and keep up the pressure to ensure that at some point at least the minimum requirements for the protection of animals during transport are complied with.