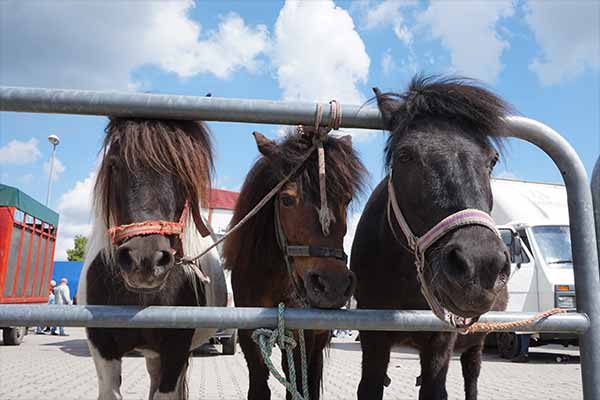 The team of Viva! Intewencje, on behalf of Animals' Angels, inspects the horse market in Pajęczno. The market is no longer operated by the city council as the new mayor decided that he wouldn't run such an event, but a local entrepreneur took over. The market is bigger than usual, with over 500 horses, and more traders, including those overusing alcohol.

The temperature in the shade is slightly above 20 °C, but the lack of shade at the market premise brings it closer to 30 °C. Some horses remain loaded on the trailers, that keep warming up from the sun. One of the ponies lies down, panting, trying to find shelter in the shade of the truck. As the situation attracts interest of bystanders, the traders lift him up, demonstrating there is nothing wrong about this horse in their opinion.

Even though there is water access at the market, just three cases of watering the horses are observed. The handling of the horses is as reckless and brutal as usual, with such examples as dragging horses by their tails, using a whip on their legs, or even loading one of the horses backwards on a trailer.

Despite the official ban on sale of alcohol, it is sold openly at the market, what results in large number of traders being visibly drunk, with an extreme example of one of them urinating straight on one of the horses.

The city council, as the owner of the property, will be notified of the observed violations and the documented crimes will be reported to prosecution.