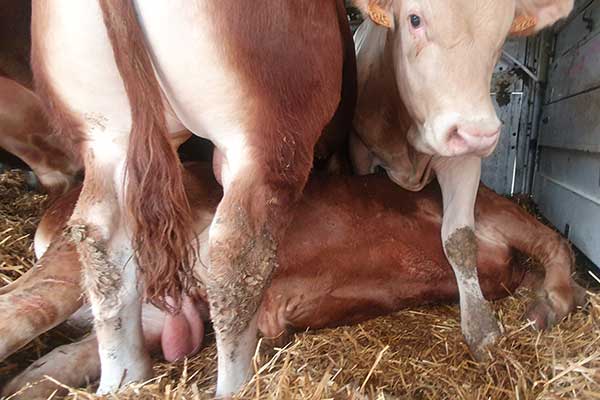 Animals' Angels controls animal transports at the Lithuanian-Polish border. We can't believe our eyes when we look inside a Greek truck: On two decks, young bulls stare back at us, their ear tags identifying France as their country of origin! What madness - is the first thing that runs through our minds. As young calves, they were transported from France to Lithuania for fattening. Now they travel more than 2,300 km to Greece. There they are further fattened and finally slaughtered. Across Europe in their young lives - always subjected to profit.

The whole thing becomes even more absurd when you consider that Lithuania is one of the major exporters of young, non-weaned calves to Southern Europe. The "problem": Lithuania has a surplus of so-called 'milk' calves, i.e. of dairy breeds. But just not of calves descended from meat breeds. Therefore, the young animal babies are carted all over Europe when they are only a few weeks old - obeying the needs of the market.

The needs of the animals are only secondary (if at all). At the Polish border we arrange for a check by the road traffic inspectorate. The truck with the young French bulls is overloaded. The strong animals are standing close together. Those that lie down run the risk of being kicked and injured by the other animals. The bull Maurice is already lying exhausted on his side. The driver struggles to get him up again - but the lack of space makes it even harder for Maurice to get up.

On the way south, the animals can expect great heat. The high density of cargo on board makes it impossible for the animals to reach the water troughs. Barely one and a half hours after the stop by the police, three official veterinarians arrive. The result of the examination is sobering. They neither take a closer look at the individual animals, nor do they take a look at the upper deck. The papers are in order, as is the loading density. Nor do they see any problem in the fact that only one driver is carrying out this long transport to Greece. The truck is allowed to continue.

According to the papers, the truck has scheduled several stops with unloading on the way. Later, we learn from the dispatching veterinarian in Lithuania that the unloadings are to prevent the animals from being transported in the greatest heat. Our demand for this: The animals must not be sent off at such high temperatures at all, certainly not on long distance!

For us it becomes clear once more: Stricter laws are urgently needed! The temperature specifications and loading densities must finally be interpreted in favor of the animals. And: The laws must be enforced effectively. For this we urgently need educated and trained personnel in the control authorities!

We will report the case to the competent authorities in Poland and Lithuania and demand a thorough investigation. At EU level, we are campaigning for a revision of the EU transport regulation in the interests of the animals.