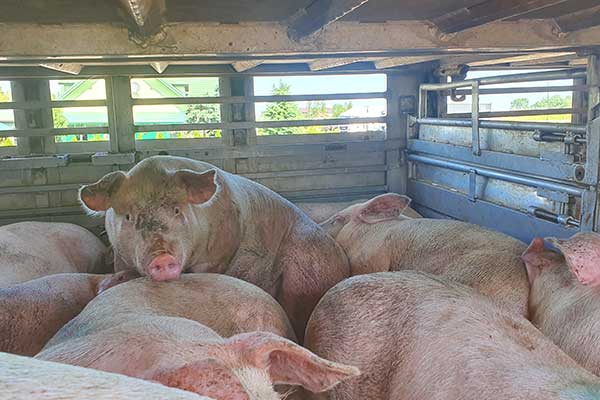 Animals' Angels is on the road in Lithuania and Poland. We document animal transports that start from the Baltic States and go towards Poland and possibly even further. Since last year, we are here again increasingly on site - because we have noticed that the authorities have apparently not looked closely for far too long. There are a lot of 'slaughter' animal transports on this route. Pigs lying tightly packed on the metal floor of the truck. Many transports are declared as so-called short-distance transports; according to the law, they don't even have to have bedding, for example.

We also find a pig transporter that, according to the drivers, takes longer than 8 hours to get to the slaughterhouse - it too is without bedding. Although the drivers try to convince us that the few sawdust on the floor would be sufficient. But we see it differently! Bedding should at least provide a minimum of lying comfort for the animals and of course absorb urine and feces. Both are definitely not the case here.

In addition, we notice that the nipple drinkers in the first deck are virtually inaccessible to the pigs. Either they are set too high or too low. We doubt that the animals can drink like this - which is impossible anyway, since the water is turned off during the trip. However, on long-distance journeys this is a legal requirement.

We will contact the local authorities with an appropriate complaint and make a strong case for the animals on this transport route.