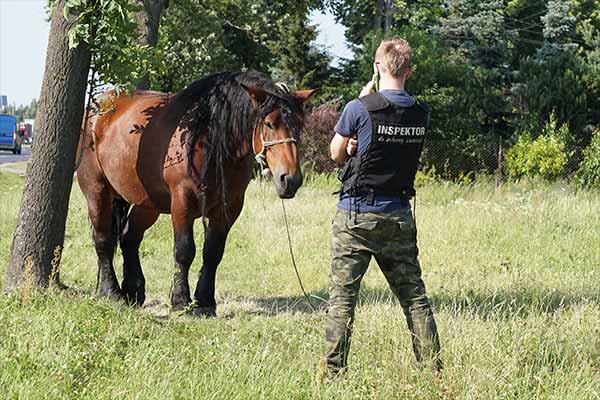 The team of Viva! Interwencje receives an urgent call about a horse that has been kept in plain sun for several hours and the owner has ignored even the police orders to put the horse in the shade.

When the team arrives at the spot, the car's thermometer indicates 37 °C and the horse is still tethered in the field, which as it turns out, is located next to a slaughterhouse. The horse tries to hide from the sun behind a tree, but it gives him just a little shade, and her chain is too short for her to reach any cooler spots.

The mare is tired and one of her hind hoofs looks severely overgrown. The team calls the police just to learn that the officers have already intervened there twice that day and even watered the horse.

Suddenly a man appears, coming from the neighboring slaughterhouse premise. The man claims to be an owner of the horse, that the horse likes to stand in the sun, and that the hoof is being treated by the slaughterhouse vet. He also claims that the horse doesn't want to drink water, that is why she has none. For some reason however, after several minutes of dispute he decides to move the horse to the shade, just 50 meters away, still claiming this is not because of the team's intervention.

The county veterinarian will be requested to inspect the horse's maintenance conditions at the property as well as her treatment history. The team will also notify the prosecutor of the case of animal abuse as the law clearly prohibits exposing the animals to extreme temperature without shelter.