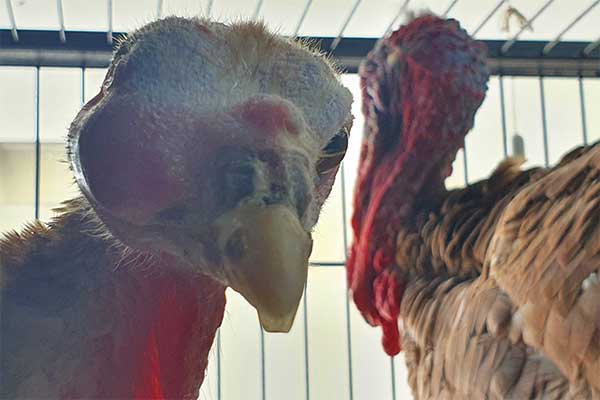 Animals' Angels is at the bird market in Umm Slal. Chickens, ducks, geese, turkeys, guinea fowl, quails, pigeons, budgies and even rabbits are sold there. The active market area currently consists of only three stores - they are indoors and the air conditioning ensures bearable temperatures. Still, the air is drenched in the ammonia stench of all the bird droppings. Breathing is difficult.

As we walk through the rows of cages, we are shocked by the neglected condition of the animals. Many of them are injured or sick. Like the turkey Amelia. She suffers from a large abscess below her eye. It is already so large that her eye is swollen shut. The chicken Edda has an injury on her claw, maybe it is broken. But nobody of the traders cares about it. Also, the sight of the so-called 'fattening' chickens seems to be completely normal for them: their plumage is so tattered that the bare skin is visible over a large area. Some just lie there apathetic and with hanging heads and seem to have given up. In another cage, completely terrified, the chick Nuri squeezes into a corner together with a group of ducklings. They have no water. Even the adult waterfowl are not provided with any bathing facilities in their cages.

The looks of the two rabbits Melih and Hilal are especially imprinted in our hearts. They are also kept on the grid, without bedding, without soft ground.  There are no hiding places for the fearful animals. Melih and Hilal suffer from a skin disease that has already spread over their ears and nose. They look pathetic, but their condition is not a problem for the traders. They are denied veterinary treatment, just like the other animals here. They are not seen as sentient beings, but simply as a "piece", which is to be sold at all costs. We ask ourselves how it can be that buyers for these sick animals can still be found. But a lack of empathy towards the animals, a lack of knowledge about their sometimes serious state of health and a disinterest of the authorities in the introduction and control of animal welfare standards leads to this untenable situation.

For us it is clear: as long as the animals are entrusted to untrained workers, unfortunately nothing will change for the animals on site. Qatar finally needs an animal welfare law and must then implement it consistently. For the animal traders and sellers it needs sustainable training, so that in the long term positive changes for the animals can occur.