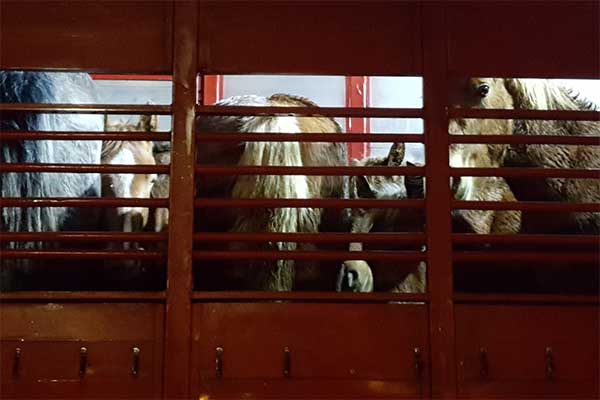 ANDA and Animals' Angels are filing a complaint against Spain for regularly failing to comply with the regulations on the protection of horses during transport. The complaint initially relates to the transport route from Spain to Italy. Here we have been observing the conditions of horse transports since 2007. In 14 years we have repeatedly found the same violations. Until today, the competent regional and national authorities of Spain do nothing to stop them.

EU laws state that horses that are not used to a halter cannot be transported for more than eight hours. Yet, the vast majority of horses transported from Spain to Italian slaughterhouses have never worn a halter in their short lives.

In addition, the regulation requires horses to be transported in individual stalls on long journeys. This regulation is not followed when horses are transported between Spain and Italy, as they are almost always transported in groups. The complaint also includes non-compliance with EU regulations in shorter transports within Spain, where often too many horses are loaded and the ceiling height of the vehicles is too low.

The disregard for the law causes stress and suffering for the horses being transported. Their safety and physical integrity are not guaranteed. This is far from the dignified and appropriate treatment that the horses deserve on their final journey.

According to Alberto Díez of ANDA, "Animal welfare laws are the guarantors of dignified treatment of animals. If they are not respected, this guarantee ceases to exist and the animals have to bear the consequences. We hope that the complaint against Spain to the European Commission will serve as an incentive to finally enforce the laws and respect animal welfare." Now the EU Commission is called upon to act.