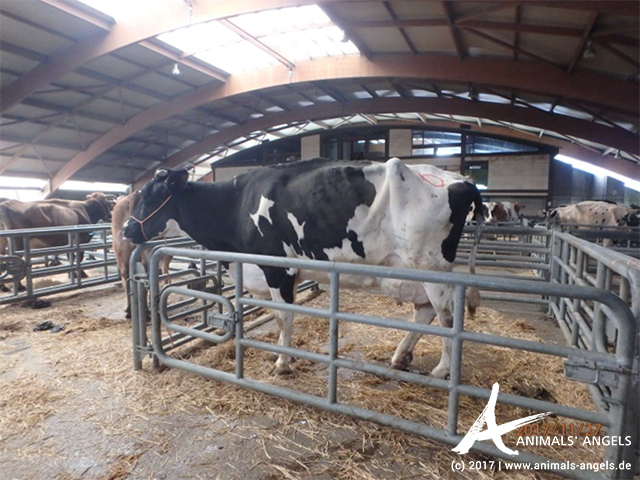 Animals‘ Angels an ANDA from Spain inspect the animal market in Pola de Siero where cattle and some horses are sold to slaughter on a weekly basis. Over the past years, we have been regularly inspecting this market and, together with the market administration, could achieve many improvements for the animals. Now we want to see whether the established standards have been maintained or even further improved.

But right at the beginning of our visit we spot Anabel, a lame cow, who should not have been transported to the market. The official veterinarian and the market director take action against Anabel’s seller and order to bring her to the nearest slaughterhouse.

But in the afternoon, after the official veterinarian and the market director have finished work, Anabel is still there: for over ten hours without food or water. Her seller justifies himself by claiming that the market is a better accommodation for Anabel than the slaughterhouse with its bare concrete floor and glaring lights.

Without a doubt, the veterinary inspections at the market have improved. In the past, nobody would have cared about Anabel and her seller would have gotten away blamelessly. Altogether, the condition of the animals and their accommodation has improved. Additionally, the market director shows us construction plans for modernizing the market in terms of animal welfare. The renovations are supposed to start in December.

Nevertheless, there is still a lot for us to do in Pola de Siero. We decided to inspect the market more often again.