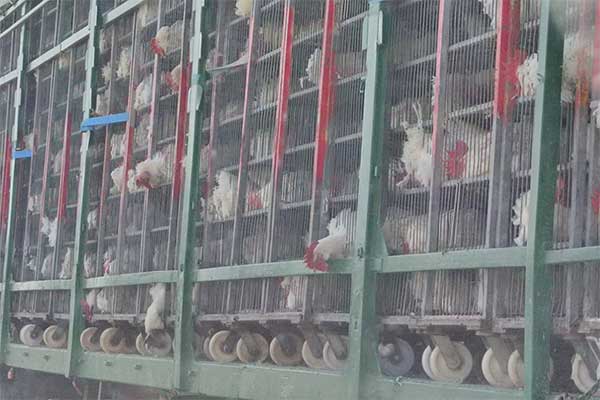 Extreme heat wave in Spain: The authorities urge people not to leave the house in the afternoon. Some cities are experiencing record temperatures. But animal transports continue. Animals' Angels is on highway AP7 heading towards southern Spain when we see an animal transport with chickens (so-called broilers) at 16:00. Our thermometer shows 38 °C.

It is obvious that the animals are suffering: desperately they stick their heads through the narrow bars of the cages in order to find relief in the driving wind. The birds are extremely sensitive to temperature. Scientists have therefore long recommended that poultry be transported only at temperatures of up to about 25 °C. While the EU law on the protection of animals during transport states that animal suffering during transports must be avoided, it does not give specific details on the temperatures allowed for 'short' transports of up to eight hours.

Animals' Angels and the Spanish animal welfare organization ANDA have therefore prepared information brochures on how to deal with heat transports for the Spanish police, which have already been distributed widely throughout the country. But in this case, alerting the police is not an option. Because if the transport is stopped (such controls usually take a little longer), the situation for the animals would become extremely worse.  We take photos and videos and complain to the slaughterhouse operator and the relevant authorities.