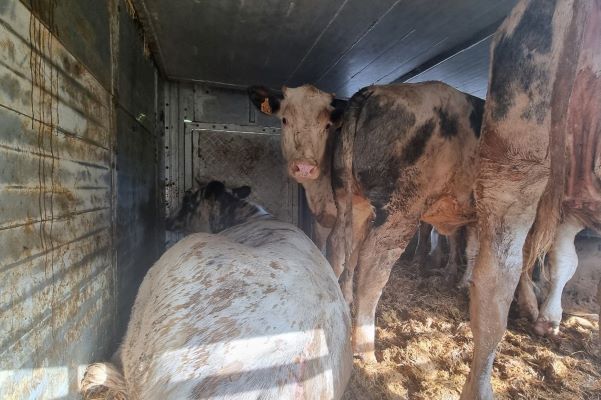 Animals' Angels and ANDA are conducting a joint escort of a cattle transport from the north-east of Spain to the Canary Islands.

Before the animals cross the Atlantic on their way to the Canary Islands, they are transported from the northeast of Spain to the southern Spanish port of Cádiz, where we await them. The situation on board the truck is alarming. Clara, Isabelle, Nadine and the others are already exhausted and thirsty. They are lying on top of each other and have no way of moving to regulate their body temperature due to the lack of space in the vehicle. The calves on the second floor of the truck are constantly roaring and licking the metal bars. They are probably extremely thirsty.

After two hours of waiting, the order comes to drive onto the ferry. But it is not until six hours later that the ferry leaves the harbour for Santa Cruz de Tenerife, a journey of 31 hours lies ahead of the animals.

Once on the island, the truck drives to a public car park. The animals are forced to remain in their own excrement and urine on board the truck for another five hours until the buyer arrives in a small truck. Then they are gradually transferred to the smaller truck and taken to their destination in four trips. Clara and Nadine are extremely dirty and exhausted. But the worst thing is that Isabelle could not survive under these terrible conditions. Isabelle died in the truck on the ferry during the crossing. The temperatures in the truck reached more than 39 °C. Our hearts are heavy and it is immensely sad to see Isabelle in these circumstances.

Isabelle's case is not an isolated one. It is just another example of what can happen to animals on long-distance transports in the EU. This case shows us once again that the transport of so-called 'slaughter' animals must be limited to a maximum of eight hours.