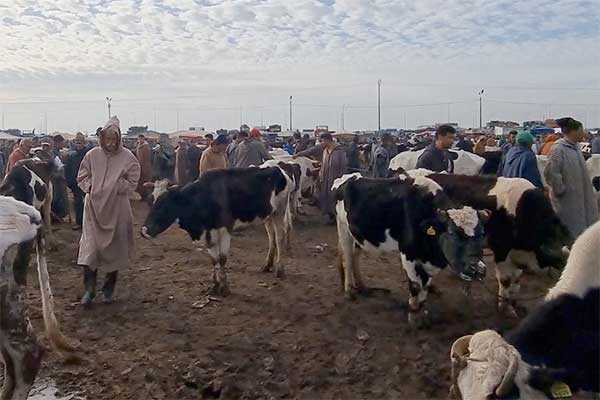 Catastrophic conditions - during transport, at the markets, at slaughter: this agonizing fate awaits countless 'dairy' cows from Germany on their way to Morocco every year. We make pressure on the Federal Minister for Agriculture Cem Özdemir and demand him to act! A Germany-wide ban on these 'exports' is long overdue!

In March 2022, Animals' Angels is with the animals at the markets and slaughterhouses in Morocco – we also meet German 'dairy' cows again. Like Adele, a black Holstein cow from Lower Saxony. She was exported to Morocco in February 2019. Three years later, we find her in a slaughterhouse near Rabat. It is early morning and still dark outside. Lighting is sparse in the slaughterhouse and workers use extra headlamps during the slaughters. Terrified, Adele tries to get her bearings. Her eyes are blindfolded with a plastic bag as she is led into the slaughterhouse. There, her back leg is pulled up by a rope. She tries to catch herself with her front legs until she finally falls onto her side. Desperately trying to get up, she hits her head on the bloody floor - her eyes still blindfolded. Fully conscious, her throat is slit with four cuts.

Adele's fate is not an one-time example, but sad everyday life for many animals in Morocco - their welfare plays no role here. There is still no national animal welfare law; official animal welfare controls at husbandrys, during transport and slaughter of 'farm' animals simply do not take place. Most slaughterhouses in the country do not even have an official license.

Despite the known and glaring animal welfare problems, Germany exports 'breeding' cattle to Morocco - more than 11,200 between 2020 and 2021 alone (EuroStat). Legal opinions confirm that an export ban is not only legally possible, but also required by EU and constitutional law. The Bundesrat also declared that "further measures are necessary to protect farm animals exported to third countries from treatment contrary to animal welfare standards even after completion of the transport."

In a letter with comprehensive documentation about the German and European cows found in Morocco in March 2022, Animals' Angels calls on the Federal Minister of Agriculture, Cem Özdemir, to act.