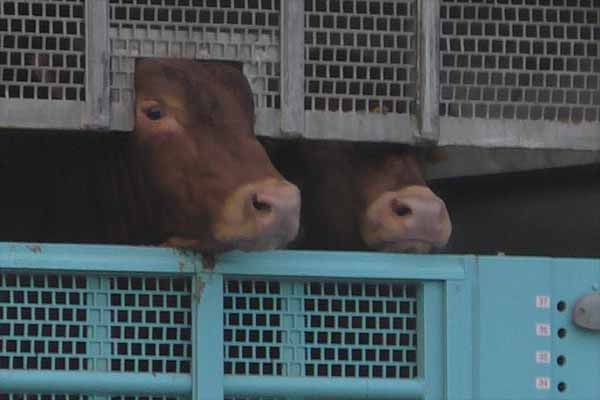 We see Olivier and his 34 fellows for the first time on a motorway in France. There we accompany the transport for a good two hours through slow traffic until it stops at a rest stop. Driver change! Two young men climb out of the truck. They tell us that the animals were loaded in Spain. The destination was an Italian slaughterhouse. In about 100 kilometres they want to take the prescribed one-hour break for the animals.

Trust, but verify! We follow them through the dense traffic. About an hour later the animal transporter drives to a resting place. But it is completely overcrowded and the truck cannot park anywhere. He is forced to continue its journey.

After one hour we get into a traffic jam behind a toll station. Nothing moves anymore and in the rear-view mirror we see that the truck is parked on the side strip. It is impossible for us to stop in this traffic chaos. We decide to turn around and pass the tollbooth again to look for Olivier and the other bulls. We are tense because we are afraid that we will not be able to catch up with the transporter in time. But luck is on our side and the truck is still in the same spot - but standing in the blazing sun.

Again we talk to the drivers. They show us the inside temperature of the truck. Olivier, Marc, Pascal and all the others are standing on the truck at over 30 degrees. The drivers tell us that there was no other parking spot and that they still have about four hours to drive.

At midnight we finally reach the slaughterhouse and wish for only one thing: that the bulls will hopefully soon be released from their suffering and find peace. We get out and wonder that it is dark in the slaughterhouse. We learn that the unloading takes place in the early morning hours. Due to incorrect planning, the animals have to wait another six hours on the truck until they gradually run to the slaughterhouse in the morning. The driver looks at us somewhat pitifully as we look wordlessly into the truck and touch Olivier for the last time with our fingers.