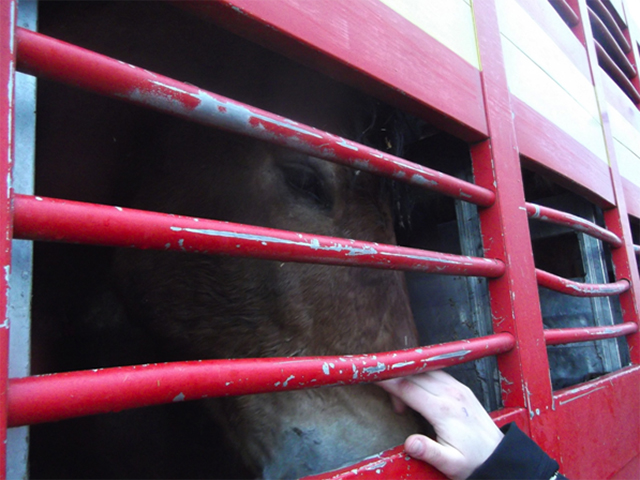 Animals' Angels is on highway A10 near Bordighera, Italy, when spotting a truck with horses. Inside are 21 young creatures loaded at a farm in Spain, Vall d'Uixo.

They have not been watered yet and even though it is winter and not hot, they are all sweaty. The truck looks old and is not equipped with single-troughs being connected to a water system: the driver shows the team three mobile buckets with which he has to water the horses manually, three by three. The driver says that he will water them later, after 14 hours of travelling.

As none of the horses is wearing a halter, the team suspects them to be unbroken. Their assumption is supported by the fact that the animals are coming from an area where horses are usually raised freely in the mountains. The horses are all covered in mud at their legs, belly and up to their flanks which also indicates that they lived outdoor lives.

After 6 hours of trailing, Animals' Angels calls the police who immediately arrives and checks the animals. The driver is imposed a 3000 euro fine for the truck missing an adequate water system and for not having watered the animals. The police invites the drivers to immediately water the horses at the gas station. While they do this, the team interacts with the animals, some of them are diffident but Gabriel and Martha smell their hands and are happy to be cuddled. Unfortunately, they continue their journey to a collecting farm in south Italy where a sad destiny will await them.

Animals' Angels immediately alerts the Italian and Spanish authorities since this transporter has been repeatedly breaking the law, asking them to take action to prevent recurrence.