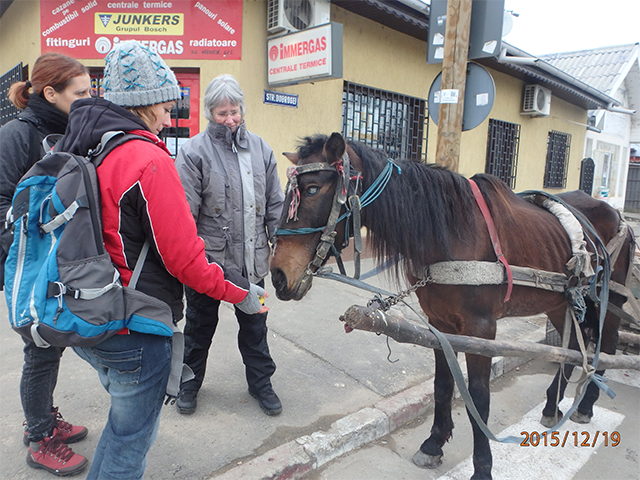 We named her 'Christmas'. We first met her in the small-town Calarasi at the side of the road hitched to a carriage. She looks miserable. Christmas is blind on one eye, emaciated to the bones and green snot is coming out of her nostrils. She shows an open wound at her fetlock.  Her owner is strongly intoxicated.

We follow the carriage and Christmas to the man’s house. He lives alone with nine children in desolate and poor circumstances next to a dumping ground. We confront him with Christmas' condition but he shows no insight.  We promise him to come back and set out for getting some medicine and feed for Christmas and food for the children. Three times this afternoon we return to the house, but there is no trace of the man or Christmas.

We try again the next day. Not far from the man’s house a dead horse is lying amidst the garbage. We approach her slowly until we recognize – it’s Christmas.  She is filthy dirty and shows a big wound at her anus. Beer bottles are lying next to her, some bloody and broken. We do not know how Christmas came to death and what was done to her. All we can do for here is to pull off the tight halter, close her eyes and light a candle. We hope that Christmas will now find the peace which was refused her on Earth.

(We reported Christmas' 'owner' to the police and notified the authorities of the alarming living conditions of the man's nine children.)