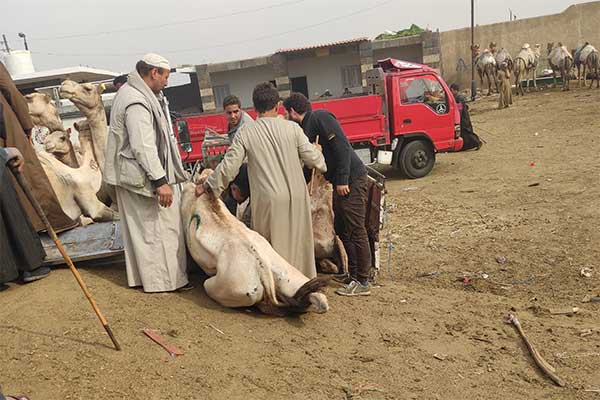 Shortly before the beginning of Ramadan, the camel market in Birqash is once again very busy. Our team is on site, monitoring and documenting the loadings. They are happy that the workers listen to them and do not beat the camels – at least when they are on site and watching.

But also today our two young employees witness cruelty again. The completely emaciated and weakened camel bull Hawi collapses. He can no longer stand up. The owner orders a transporter to bring the animal to the slaughterhouse. Then he disappears. Our team tries to help Hawi, but unfortunately in vain. The transporter insists on loading Hawi and taking him to the slaughterhouse. Our young veterinarians' hands are tied.

According to international animal welfare standards – which Egypt has also committed to uphold – the transport of such sick and weak animals to slaughter is forbidden. But in a country with indifferent authorities, which also has no animal welfare law, such international standards come to nothing. Our team is saddened and devastated as there is no help for Hawi.