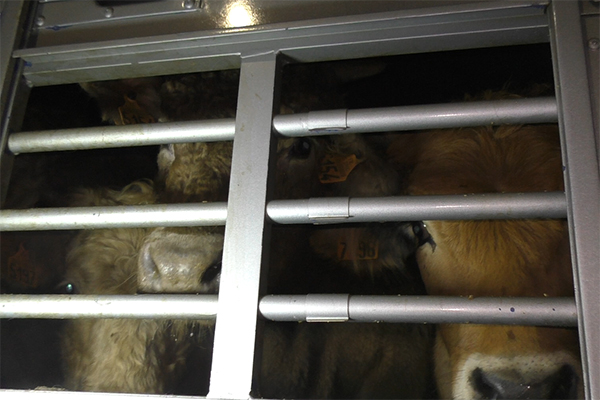 Edouard – a young bull from France. Hundreds of cattle like him are transported from France to Italy every week. There they stay for about a year in 'fattening' stalls before they are eventually killed.

Edouard stands densely together with his companions and can hardly move. This is obviously common practice for these transports. Already 10 years ago we documented such animal transports here. This is because the industry wants to make as much profit as possible of the animals – and the laws provide far too little space for the animals.

In order to be able to control the transports here at the Fréjus tunnel on the border between France and Italy as accurately as possible, we ask the responsible official veterinarians and policemen for joint controls in advance. Unfortunately, however, they have no time. And for safety reasons, we cannot be alone in front of the tunnel for long periods.

It is a contradiction: animal transports that systematically violate the law can cross the border unnoticed. That is normal. But we who want to point out these violations are not be tolerated here. In follow-up discussions with the competent authorities, however, it becomes clear that their hands are also tied. Often because they lack resources. We will therefore try to organise joint controls through the ministry – hopefully to improve transport conditions for cattle such as Edouard.