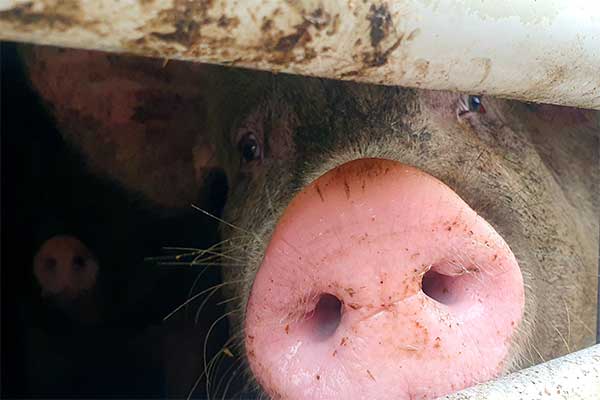 Animals' Angels is in Lithuania and controls animal transports that are on their way from the Baltic States to Poland. Among them are two transports with pigs that are particularly memorable for us.

The 355 Lithuanian pigs are being transported to a Polish slaughterhouse. According to the driver, they were loaded only two hours ago, but when our team looks into the trucks, they are shocked by the transport conditions. The pigs are completely filthy; many of them are lying or sitting in puddles of feces and urine on the bare metal floor. Bedding is completely missing. So far, by law, bedding must be provided only for long-distance transports over 8 hours (exception: especially young animals), but of course it would fulfill important tasks even for transports under 8 hours - as is the case here: Bedding absorbs feces and urine, makes the surface less slippery and gives the animals more grip - so they can better compensate for vehicle movements. And, of course, adequate bedding ensures that the animals can lie down and rest on dry ground. Not even that was granted to Jone and the other pigs on their last journey to the slaughterhouse.

Jone lies next to vomit, looking exhausted and apathetic. Still other pigs are sitting in unnatural doggie positions, foaming at the mouth. Signs of motion sickness - many pigs get nauseous from stress, vehicle vibration, poor suspension and, last but not least, rough driving, just as we humans do. As a result of motion sickness, pigs can vomit and even die.

Once again, we are appalled at the indifference with which transports like Jone's are conducted. Not even simple things like bedding are worth it to the transport operators to make the transport at least a little easier for Jone and the other pigs. As if they were just a lifeless piece of meat. Unfortunately, it will be some time and suffering before this attitude changes in the long term. But along the way, of course, we continue. For Jone and the 354 other pigs, we are filing a complaint with the relevant authorities.