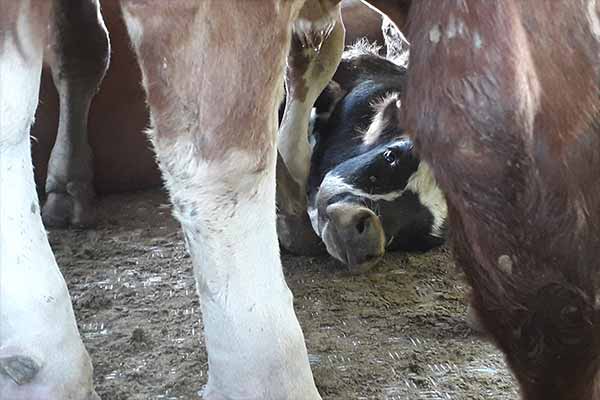 Animals' Angels is at the Bulgarian-Greek border waiting for lamb transports. Around noon, already at 39 °C, we find another truck - and a terrifying picture reveals itself: bulls, heifers and calves from Bulgaria are crowded together on two levels. Without any bedding, in their own excrement. The truck does not have a water system for cattle; the drinking nipples are designed for pigs and sheep. In addition, the water tank is empty anyway. The fans are also switched off and, according to the driver, have no function.

We quickly discover three bulls lying on top of each other. The animals can no longer get out of their predicament on their own because of the narrowness. We inform the drivers immediately. We don't know how long Kim, Jonas and Lou have had to endure in this position. It is infinitely sad to see them lying like this. With calls and electric prods the drivers finally force them to stand up so that they don't crush each other.

Due to language barriers, we don't get clear information from the drivers about the departure and destination of the animals. However, the Albanian licence plate gives us reason to fear that the animals still have a few hours' drive ahead of them. An international long-distance transport under such alarming conditions should not have been allowed. We are trying, via the border police, to have the animals checked and unloaded - unfortunately without success. Later attempts to have the transporter stopped by the responsible authorities also fail. A functioning control system and, above all, a look at the animals are completely lacking.

And so the truck continues its journey unhindered and completely overloaded, without bedding and water, in unbearable heat. It is unbelievable. Frustrated and perplexed, we follow and stop every time the truck stops to check on the animals. Unfortunately, the next case of suffering doesn't take long: Maxime lies completely exhausted on his side on the ground, while the other animals stand above him and repeatedly step on him. Again we inform the drivers and the same procedure follows as with Kim and Lou. Our hearts are heavy!

The animals are restless, exhausted, stressed and mooing constantly. In addition, the small calves on the upper decks seem to be very young. We climb up the truck; Jule looks through the bars and sucks our fingers. Hardly in this world and already exposed to such torments.

Hours later we finally reach the border to Albania. The inspection of animals and transport conditions, which is obligatory for EU points of departure, does not take place - as there is simply no veterinary authority here. Only on the Albanian side does a veterinarian check entry regulations and documents.

During the waiting time we find another calf in a very unfortunate position: Nikita lies confined between the wall and other calves on her back, her legs pointing almost vertically upwards. She breathes very heavily. Even though we could not reach the animals to be unloaded, it is the direct help that counts here and that is so urgently needed. Who knows if someone would have noticed Nikita. With a lot of effort by the drivers and with last effort she can finally get up. We hope that the final destination is approaching. At midnight the transport finally ends - the destination is a stable in Albania.

Once again it becomes clear that the welfare of the animals does not count in the smallest way. Fact is, the business has to run - and whether Kim, Lou, Maxime, Nikita and the other 105 individuals suffer doesn't matter. We have already filed extensive complaints in the hope that such a case will not happen again.