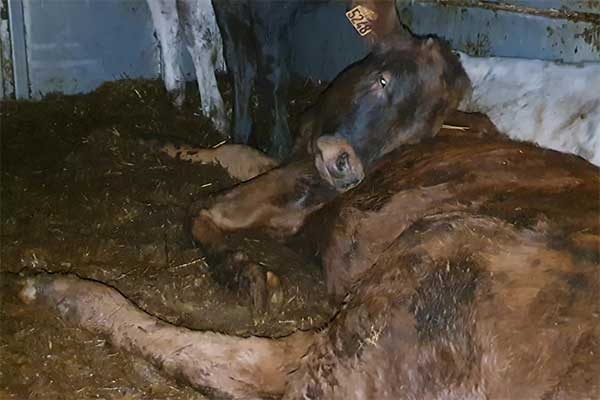 Animals' Angels and ANDA take action for the animals on the route towards the Canary Islands. This week is the last in which the subsidies for the import of cattle from the European mainland to the islands are paid - so also the last week for animal transports for the time being. After that it's 'winter break' before subsidy payments and therefore animal transports start again from next June.

In the port of Cádiz we find a transport with calves. The driver is also the organizer of this transport. He tells us that the veterinary office at the departure point in northern Spain has been alarmed since our reports in the summer and that he has been ordered to load fewer animals than planned. The calves are going to three different destinations in Tenerife - only one of which he can reach with the big truck. The other two barns are so difficult to reach that the calves have to be transferred to small vehicles en route.

When the transport arrives in Cádiz, it has already been on the road for about 15 hours. Again, the truck arrives at the port far too early, so the calves on board have to wait it out for another 12 hours. On Saturday morning, the loading onto the cargo ferry begins. The animal transports always have to be the first to enter, as they park on the top of the off-deck. Then all the cargo containers and trailers are loaded onto the ferry - and that takes time. In the early evening, the ferry departs with a delay.

For the next few hours we follow the truck crisscrossing Tenerife - first we drive over steep mountain highways to the northwest. There lies the first stable. On the shoulder of a road, 32 calves are loaded from the truck onto a small transporter. The driver insists - also because we are there - that a maximum of eight calves are loaded onto the small transporter. The buyer complains because he now has to drive to the barn four times instead of two trips - actually, he wanted to squeeze 16 calves at once onto the small loading area of the transporter. Even though the barn is only eight kilometers away, it can only be reached via narrow and steep mountain roads, so the whole procedure drags on: a total of 1.5 hours.

During this time we can finally see the animals again after the long passage by ship. They are visibly exhausted and starved. Especially the French calf Amelie can't take it anymore. She is breathing heavily and lies on her side. Amelie has laid her head down on her stomach and stretched her legs out from her. The air on board is stuffy from all the ammonia, the bedding soaked and filthy from feces and urine. Due to the lack of space on board, another calf has defecated on Amelie's back. When Amelie is to be reloaded, she is fortunately able to stand up on her own. Unfortunately, we cannot watch the unloading, because the truck with the remaining 48 calves is driving on - back towards the harbor and the northwest of the island. There lies the second barn. Here, too, the 14 calves are loaded onto a small transporter in two trips, since the nearby barn is impossible to reach with a 40t truck. Finally, the transport of the calves remaining on board continues - this time to the south of Tenerife, to a zone where it can get very hot and dry in summer. We wonder how the animals will cope. We cannot see the barn. The gate is closed in front of us and the buyers refuse to talk to us. From a distance we can at least see the calves being unloaded - at least all the animals walk off the truck by themselves and are given water and feed.

In the afternoon we check on Amelie. She is housed in a neglected barn, there are pigs, goats and horses in addition to cattle. In the middle of the yard, right next to Amelie's stable, garbage is being burned. Next to it, old, rotten loaves of bread and packing boxes lie in the mud and rain. Amelie is housed with the other 31 calves in a covered open stall that is reasonably clean compared to the rest of the farm. Among the calves, we look for Amelie. She is standing close to the others and seems to have recovered somewhat from the stress of transport. At least they also got water and food. According to the owner, Amelie and the other calves will be slaughtered in six months. For us, these transports remain a madness every time, which is still subsidized - all the strains and unnecessary suffering of the animals on such transports lasting for days, only to be slaughtered a short time later in a