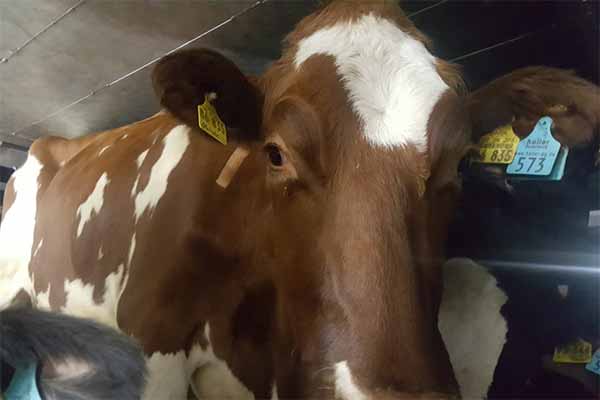 Animals' Angels inspects cattle transports going from EU to Morocco. In the harbour of the southern Spanish town of Algeciras we meet the cow Matisse from North Rhine-Westphalia.

Matisse looks at us with big curious eyes. She has a big white star on her forehead and a snip above her mouth. She is taller than most of the young cows with which she stands crammed on the truck. She therefore bumps almost with her back against the ceiling of the two-tier vehicle and cannot raise her head during the entire journey.

The truck emits a strong smell of ammonia, as the bedding is dirty and damp. The animals are brought from Germany to Morocco, over 2,500 km they have already passed. In Algeciras, it takes around five hours for all official permits to be obtained and for the transport to embark to Tangier.

During the waiting time, Matisse and the other animals are supplied with hay and water. Once arrived in Tangier, the transport is again subjected to hours of import procedures, and the temperatures climb up to 37 °C. But no consideration is given to the animals: They have to stay in their prison parked in the blazing sun.

Around midnight they finally reach the Moroccan import stable. They've overcame transport – but what happens now? After 15 days in quarantine on bare concrete floor, the cows are sold to local farmers. Who knows what will happen to Matisse?

Someone in Germany has given Matisse her name. Did they think of the famous painter or the award-winning 'breeding' bull Matisse Red? Why did they name her? Because they respect her as individual? Or was it a pragmatic decision, because a name can be remembered better than the numbers on an ear tag? Does the name giver know that Matisse is going to a country where there is no animal welfare? Where at animal markets and slaughterhouses most cruel scenes take place?

Would the German farmer have allowed Matisse to be sold to Morocco if he or she had once visited a Moroccan slaughterhouse? Or saw adult cattle being pulled by their tail and horns onto a two-storey truck at a market? Or saw the dark, desolate stables where 'fattening' bulls live their lives tied to a short chain?

How much importance do German farmers and cattle breeders really attach to animal welfare? It looks as if they will quickly forget their animals and their protection when their financial advantage is at stake.