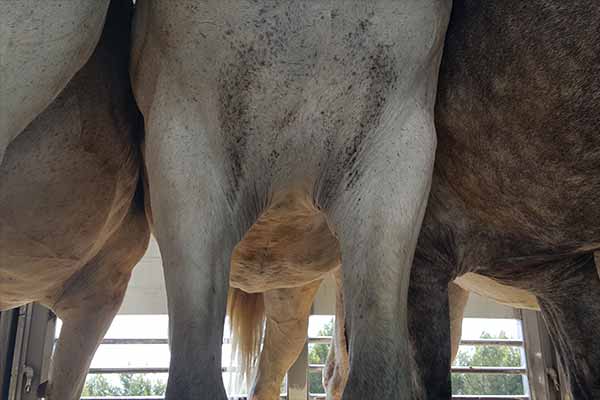 Together with the Spanish organization ANDA we spot an animal transport with horses at the border from Spain to France and follow it. During a short stop in the south of France the drivers tell us that they had loaded the horses at Barcelona. Their destination is Venice, Italy.

We notice that the horses are not transported in individual compartments as prescribed. In addition, we do not see any drinking system. With the exception of two horses, the animals are not tethered and very restless. Some of them are densely packed, body to body. Among them are also two stallions.

When the drivers realize after more than four hours of driving that we are sticking to them, they turn around and drive back to Barcelona. They are obviously afraid that we will alert the police and face heavy fines. Of course we want to see where the horses are now being taken – and indeed the transport returns to a stable near Barcelona.

We want to talk to the owner and see how the horses are doing. But the Italian haulier has obviously taken precautions: Two vehicles are being used to block our access to the stables. Something similar happened to us at the same place seven years ago. At that time a horse transport from this stable going to Italy also reversed half way, for fear that we could alert the police and report his animal welfare violations. At that time we had submitted appropriate complaints to the authorities and visited the competent veterinary office. But apparently nothing was done.

That is a shame for the authorities. All too often they do not fulfil their role of monitoring compliance with animal welfare rules. Instead, constant pressure from NGOs and the media is needed to ensure that at least the minimum legal requirements for the protection of animals during transport are met.