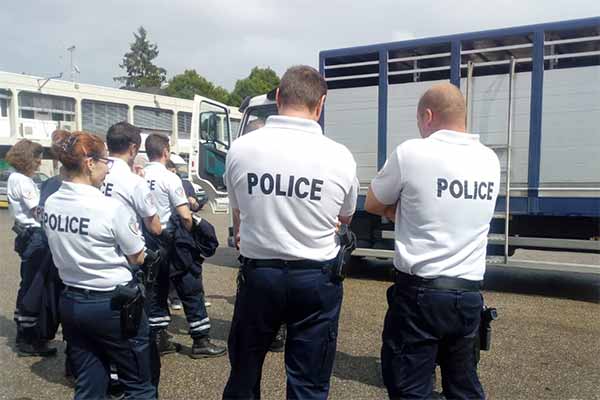 Once again, we are in Metz, France, training a second group of police officers in effective animal transport inspections. After the theoretical part in the morning we find a local animal transport with seven cattle in the afternoon. The heavy bull Claude and three heifers are transported to the slaughterhouse in Metz. The three calves Arthur, Henri and Jean were collected from a nearby animal market and are now taken to a nearby collection point.

While the policemen check the transport documents and the vehicle, we briefly look Arthur and Jean in their innocent eyes. In their short lives, they have been transported several times from one place to another – and their fate is uncertain. Will they be taken to a fattening stable in Italy after their stay at the assembly center – or even to a country outside Europe to be killed there? We do not know.

The transporter receives a warning due to a missing document, whereupon he can continue his journey. We would like to thank the police in Metz for inviting us and for their interest in paying attention to the so-called 'farm' animals on Europe's roads!