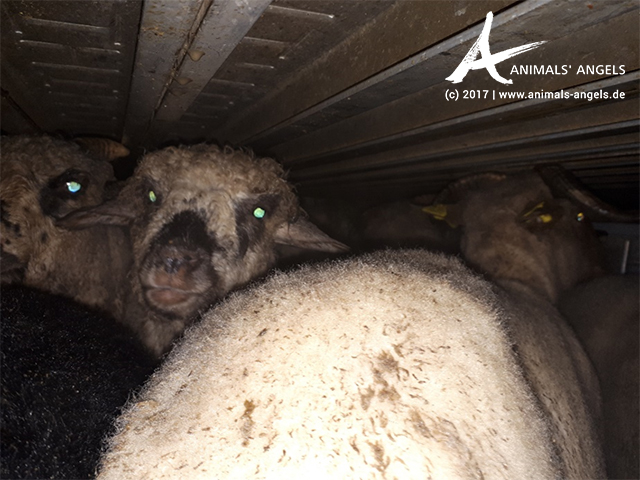 Animals’ Angels is in the Region of Giurgiu, Romania, following a transport of Romanian lambs going to a slaughterhouse in Athens, Greece. For economic reasons, the lambs are transported on four instead of three decks, which significantly reduces the internal height on each floor. Many lambs are touching the upper decks with their heads, so they cannot stand comfortably but are confined under very cramped conditions. This also hinders adequate ventilation and raises ammonia gas levels inside their compartments which is very unpleasant and irritant to breath in.

As if not enough, the lambs are not provided with adequate bedding material ensuring that they can rest and lie down comfortably during such a long journey. Rather they are forced to stand and lie on the metal floor which is covered with a wet and muddy mixture of excrements and urine. For the lambs this is even worse in view of the current outside temperatures which have fallen to -2 °C whilst the truck was driving in the night through heavy snow-storms in Romania and Bulgaria. For a minimum of care, the animals should at least be provided with a thick layer of bedding material for them to rest as good as possible under transport conditions and maintain their body temperatures.

Driving through Bulgaria, we alert the police about this transport, expecting that they would arrange improved transport conditions for the lambs. Unfortunately, the police is not trained in the application of EU transport regulation for animals and the truck is allowed to continue the journey without any measures taken.

Animals’ Angels also contacts the responsible authorities in Greece and alerts them about the observed irregularities. But the one-hour break shortly after the Bulgarian-Greek border is not enough time for them to act. Therefore, the lambs are transported in the same conditions directly to a slaughterhouse in Athens.