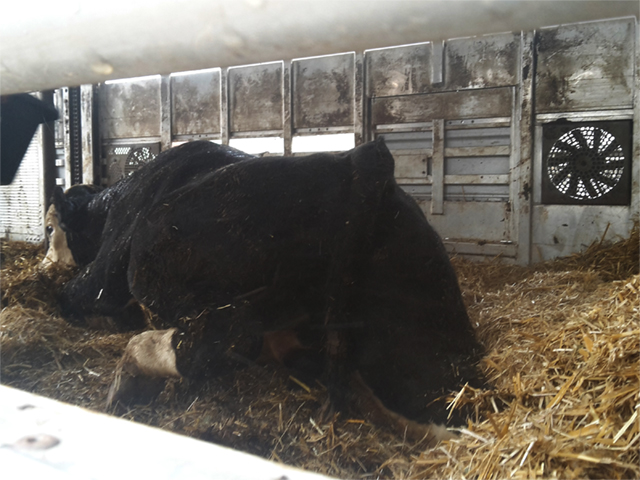 Animals' Angels follows a truck with 'slaughter' bulls coming from Lithuania. The day before, together with three other Lithuanian trucks, the truck has passed the Bulgarian-Turkish border where the animals are afterwards unloaded until completion of customs documents.

During unloading, bull Leonas is not able to stand up. The driver’s attempts all fail to get him back on his feet (pulling, dragging, dashing with water). Hence, as well as the bulls inside the second loading deck, he remains in the truck until the transport documents are completed.

According to EU regulation 01/2005, it is prohibited to transport so called ‘downer’ animals (animals being unable to get up without help). Yet still Leonas is transported for another 420 km until his ‘place of destination’, a slaughterhouse in Sakarya. The animals arrive there at 7:30 in the morning, being inside the truck for more than 39 hours at that time. They still face another four hours of unloading – at a slaughterhouse where they are going to be killed this very day. Animals’ Angels tries to be there during unloading, but we are not admitted into the state-operated facility. Due to the Turkish festival of sacrifice, Kurban Bayrami, the competent manager is being not available.

It is unacceptable that the animals are transported over several days and thousands of kilometers directly to a slaughterhouse while even being unfit for transport. We will file a complaint to the competent authorities to achieve justice for Leonas and the other bulls – and we will keep up political pressure on EU level to stop this kind of illegal transports in the future.