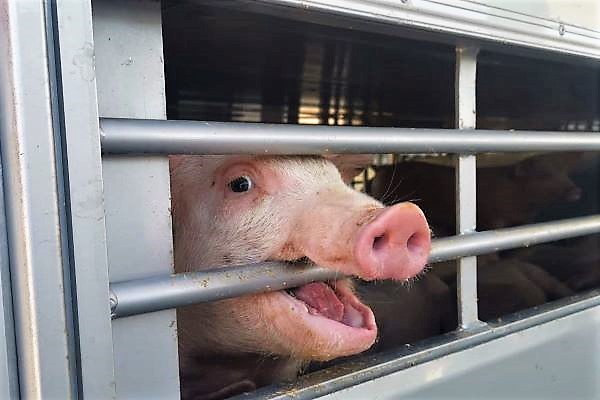 Animals' Angels observes a Dutch transporter with piglets from Denmark on the highway north of Bologna. The 696 piglets are loaded on five tiers. The outside temperature is 39 °C and the animals are visibly suffering from the heat. Many piglets are panting and foaming at the mouth. Several lie exhausted on the floor. The water system is switched off.

Below Ancona, the truck leaves the highway and parks in a field between towers of straw bales. The drivers give no coherent explanation as to why they are stopping - apparently for a long time - in this heat.

Animals' Angels calls the carabinieri to ensure that the animals are transported to their destination as quickly as possible. It turns out that the entrance at the destination is too narrow for the large truck. Some of the piglets are transferred to a smaller truck, which takes them to the unloading site. This procedure is repeated. In total, the whole process takes just under four hours - with the heat continuing to be intense!

Animals' Angels will file a complaint with the Danish and Dutch authorities because the piglets were transported at these high temperatures, contrary to the applicable laws, and the transport was not organized in such a way that the animals arrive at their destination as quickly as possible.