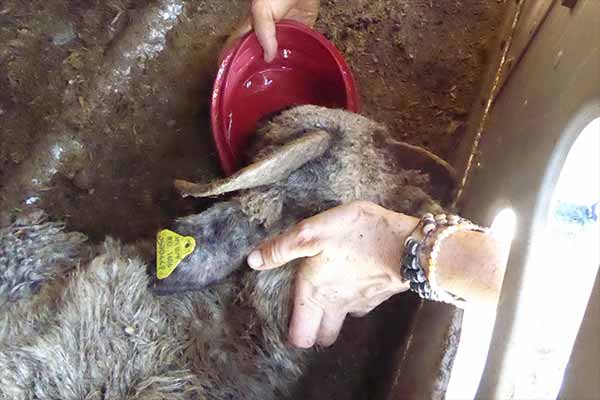 After our large-scale investigation in July on the Spain-Italy route, we are now at the border between Bulgaria and Greece. What we find there is sad and disappointing: Although animal transports during heat are being discussed throughout Europe, they still takes place unhindered. Already on the first day we see lambs, which despite 35 °C have to endure the long way from northern Romania to the south of Greece.

Already the first look into the animal transporter reveals a bad picture: We find Lamb Heliu - he lies exhausted on the ground and is obviously in his last breaths. The heat inside the transport must be unbearable. When we try to help him on his feet, we feel his whole body glowing. The metal floor under him is barely covered with bedding and burning hot. Heliu's whole body is literally destroyed by the heat.

We try to give him water, but he is too exhausted. He can neither drink nor stand. All we can do is cool him down a little with water. Unfortunately we cannot let the police stop the transport, because that would endanger the lives of all the sheep at these temperatures. Such a check can take hours. There are so many animals in the truck that the air can hardly circulate between them.

So the truck goes on and we follow it to the slaughterhouse south of Athens. On arrival, we can see Heliu again for a moment - his suffering has come to an end in the meantime. He died on the way.

In sadness we drive back to the border. But Heliu's story will not be forgotten. Because we will report about his fate and this brutal business, which obviously knows no borders - not even at these unacceptable temperatures.