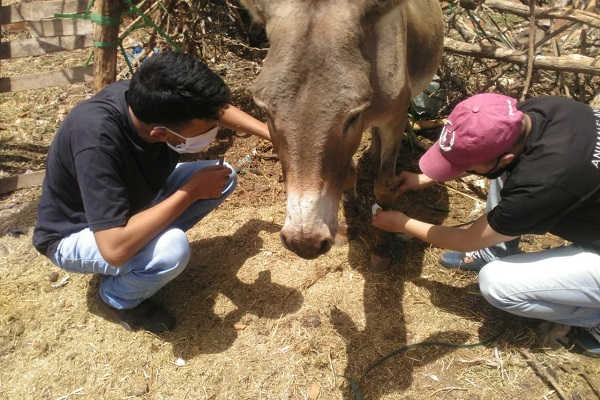 At the weekend, our Morocco team of Boubker and Ayoub was finally able to visit Michel in his home in the Skhirate area after the lockdown had finally been lifted in the Rabat region.

They were glad to find Michel doing well especially in these circumstances, the wounds in his back that were tormenting him for a while now had finally healed and he was in a really great shape. We also met Abdelkhalek and asked him about his family, and thankfully they were all doing fine.

The team asked them about their situation during the lockdown, he told us that times were tough but they’re thankful and they’re hoping that the situation will improve soon. The team was also glad to hear that Michel wasn’t overly worked during this period and they only used him to bring wood from the near forest or carrying light stuff which gave him more time to relax and rest.

When checking on Michel’s old wounds, Boubker and Ayoub were glad to see that they healed well, though they did find a small wound in his leg because of a tight rope but other than that Michel was in excellent shape. The team asked Abdelkhalek to be more careful with him but after seeing how well he was doing, the team knew that he was taking good care of him. After that, they tended to his recent wound, then cleaned and brushed his fur.