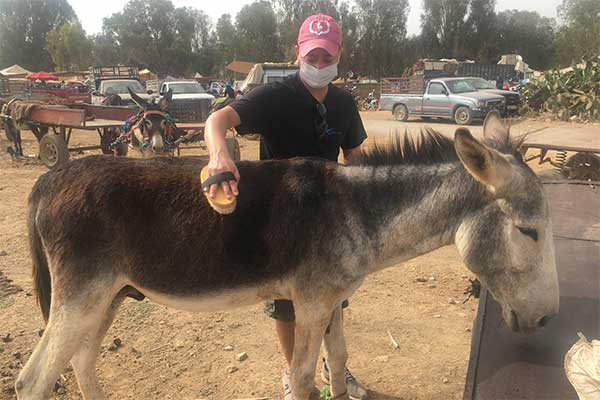 The Moroccan Animals' Angels team around Ayoub and Boubaker finally returns to the market in Skherat this Sunday to help the animals. For months they were unable to see the animals because, among other things, the markets were closed due to the strict measures imposed by the Covid19 pandemic.

Our team immediately takes care of the donkeys and horses waiting in the "parking lot" while their owners do the errands at the market. Some animals are already unsaddled, but unfortunately not all of them. Some still have the heavy harnesses of the carts tightened around their overworked backs or are much too short tied. Ayoub and Boubaker help the donkeys by taking the heavy loads off their backs. They organize water for the animals and groom them, which the donkeys obviously enjoy.

In the middle of all this our team is called by a man. He has seen the horse Radi collapse. Radi is still tied to the harness and cannot get up by himself. Ayoub and Boubaker rush over immediately, the owner is also there. Together they manage to free Radi from the dangerous situation and talk to the owner.

Today, Ayoub and Boubaker also meet the donkey Nasim. Quite a while ago they had treated his wounds caused by a harness that was too tight. Our team is happy when they see that the wounds have healed so well. Unfortunately, he has some small new wounds on his face - we don't know where from yet, but will keep on talking to the owner and hopefully create an awareness for his animals and their needs sometime. This is not an easy task, but we are grateful that Ayoub and Boubaker regularly face the difficult and exhausting discussions with the market visitors. And we are happy that they can finally be with the animals again!