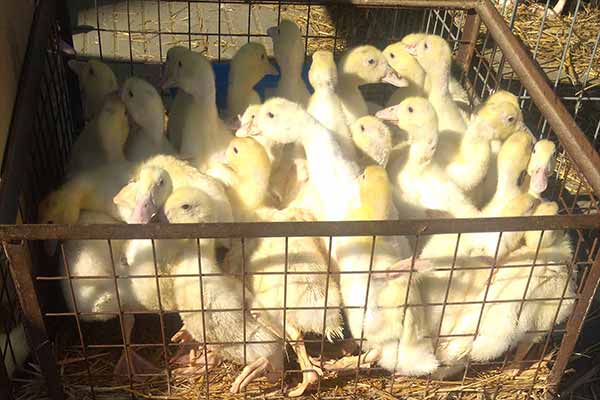 The team of Viva! Interwencje, on behalf of Animals’ Angels, investigates the animal market in Żarki to find three large traders with hens, chickens, and ducks. Weather reports alerted that this would be the hottest day in the coming week, and already in the early morning the temperatures were higher than 30 °C.

Although the bird cages were kept in the shade, they were extremely crowded. Only few of the cages were equipped with some kind of water bowl, but the bowls were big enough for one or two birds, not twenty or thirty. And even if some birds can have some water, those on the other side of the cage would never make it through the crowd.

The team finds a duckling stuck between the bars of one of the cages. When they come closer to free him, the trader comes and yanks the bird out saying "that isn’t a problem".

The cages with crowds of birds are stacked one on top of another, preventing airflow. Keeping the birds extremely overcrowded and depriving them of water and sufficient airflow contributes to their considerable suffering.

The team spots no supervising personnel at the market. The city council will be notified of the observed violations.