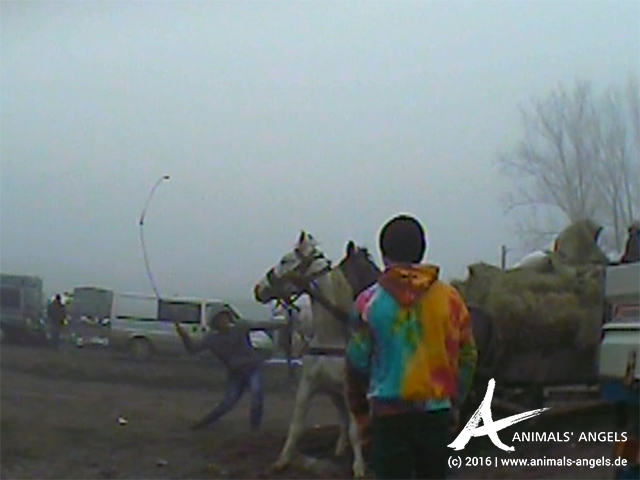 Animals´ Angels returns in the region of Suceava, north east of Romania, to check the situation at the weekly market that takes place in Vicovu de Sus, a small village wrapped into winter fog.

Two years ago, the investigators witnessed a bad case of cruelty against horses: many of them were repeatedly whipped and forced to drag blocks of concrete just to show their resilience – or maybe as a mere outlet for their owner’s frustration. This year there is less movement at the market’s area where all the horse owners usually gather, but again the investigators can witness episodes of violence against (not only) horses.

Cristian, a brown horse, is whipped and forced to drag a flat concrete block on the mud. Adrian and Andrei are whipped repeatedly, without the possibility to escape as they are tied to a carriage full of alfalfa. All of them are used as means of transports to move to the market and collect hay. And they are exposed to violence by their apparent owners: the same people that later sit on the carts and probably drive home.

When the majority of the horse owners leave the market, a truck remains parked, full with sheep. One of them, Mihai, is grabbed at his fleece by two men and dragged off the truck to some nearby bushes. There he is stabbed to death and hung up on a tree to be processes to meat.

Animals´ Angels will send the footage to the Police authorities, asking to identify the perpetrators of the cruelty against Adrian, Andrei, Mihai and Cristian.